London’s prime housing market heads into the fall season with renewed confidence and a tranche of new homes after record levels of buying nationwide this summer.

Wealthy buyers flocked back to the market, enticed by the tax savings created by the stamp duty holiday, which saw home buyers in England and Northern Ireland pay no tax on the first £500,000 (US$687,850) of a home price, with a maximum savings of £15,000.

The upper end of the market saw a flurry of activity as buyers, many of whom traded up to larger family homes to gain more space, raced to complete housing transactions before the tax relief began tapering off at the end of June.

Agents are still upbeat about London’s prime market, which has been in a lull since 2014, believing the market will be buoyed by the resurgence of foreign buyers who were deterred by social distancing rules and an international travel ban. Prices increased by 1.9% year over year through July due to a spike in transactions from March to June, according to a Savills report.

And there’s plenty of new luxury homes launching to the market this autumn to pique the interest of both foreign and domestic buyers. From contemporary mews houses at the John Nash-designed Regent’s Crescent and Pan Pacific hotel-managed, privately owned high-rise apartments in the city of London, here’s a snapshot of forthcoming projects.

This boutique development where the Chelsea Porcelain Factory was once located is in the heart of Old Chelsea, a few minutes’ walk from the Thames. London developer Martin’s Properties created the scheme, on Old Church Street, which comprises four apartments set behind a period facade and two townhouses (one has sold), which were built entirely from scratch.

The apartments offer lateral living and feature contemporary interiors with dark-grey streamlined kitchens and minimalist stone fireplaces. They sit behind the facade of the first porcelain factory in England, which began production in Chelsea around 1745. At that time the factory was under the directorship of Nicholas Sprimont and received royal patronage, leading to the development of the country’s porcelain industry.

Sprimont House, a four-story, brick house built in the style of Chelsea townhouse, sits behind the apartments and is accessed from Old Church Street. Named after the factory’s first director, it has a contemporary, light-filled monochrome interior by Andrew Martin, which includes eclectic, globally influenced stylings and a striking, neon artwork. It has an open-plan kitchen and dining room and separate living room set around an internal courtyard, a skylight-lit staircase and a lower ground floor guest bedroom with separate access. The homes are launching to the market in September.

Number of units: six (one townhouse has been sold off-plan)
Price range: £9 million for the townhouse including the Andrew Martin furniture, while the apartments start from £1.85 million to £2.35 million
Developer/Architect: Martin’s Properties/Scott Brownrigg
Residence sizes: Two-bedroom apartments range from between 974 square feet and 1,255 square feet; the four-bedroom townhouse has 3,924 square feet of living space
Amenities: Sprimont House has a basement playroom, an elevator, a courtyard garden flooding the property with light on every floor, an elevator-operated garage for off-street parking. 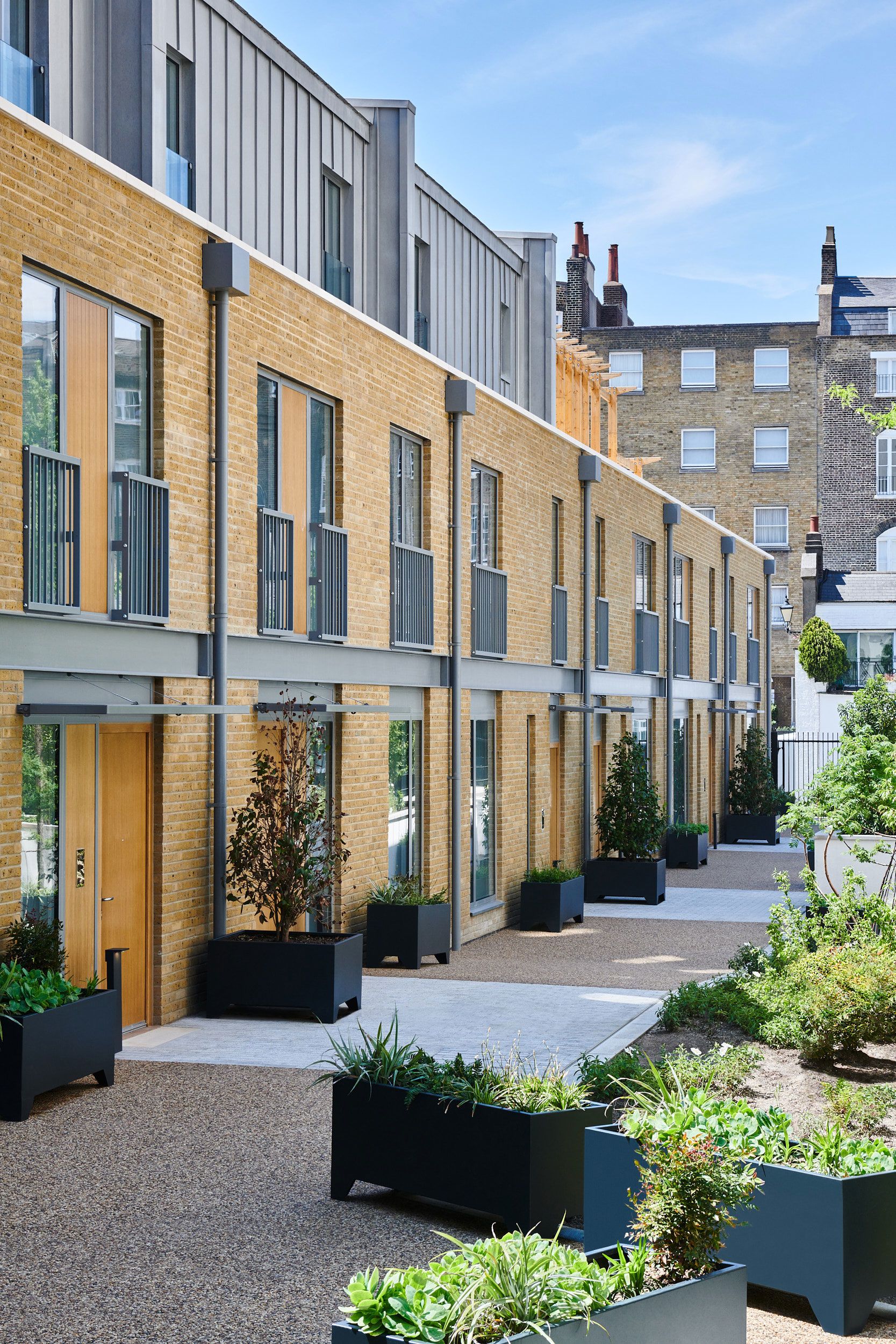 Garden Villas is a row of new-build mews houses at Regent’s Crescent—a super-prime new development in Marylebone built behind a sweeping, Regency-era crescent. The Grade I-listed white stucco terrace of houses was originally designed in the 1820s by Georgian architect Sir John Nash.

Developer CIT Group has created the contemporary three-story, two- and three-bedroom homes on a site behind the colonnaded crescent. They have hallway and lower ground floor skylights, floor-to-ceiling windows overlooking a private communal garden, access to the crescent’s private gated gardens as well as its upscale amenities, but no private outdoor space.

They were launched in July, though its show flat has just been completed and features a design centering around nature, including bold botanical wallpaper, woven green leather detailing and a mirror-lined book.

Number of units: nine
Price range: Starting at £5.15 million
Developer/Architect: CIT Group/PDP London
Residence sizes: From 1,802 square feet to 2,283 square feet
Amenities: The development has a 24-hour concierge, underground valet parking, a private 12-seat cinema on the doorstep, 9,000 square feet of residents’ amenities, including a spa, a swimming pool, a treatment room, a gym, a business suite and a Pilates studio. The private communal garden, which sits behind the Grade I-listed Regency-era crescent facade, has been landscaped by garden designer Bowles & Wyer.

Views of the Thames and the city skyline are all around at Harcourt Gardens, set on the Isle of Dogs beside the Canary Wharf district. The new 56-story residential tower is the second phase of the South Quay Plaza development by Berkeley Homes. The glass-and-steel high-rise block was designed by Foster + Partners to a concept known as “Life in Harmony,” which has a focus on indoor and outdoor greenery.

The tower has three “leafy” gardens, two of which are positioned within the 9,000-square-foot building on its 18th and 37th floors and include an indoor garden and an outside terrace filled with trees and plants. There is also a roof terrace on the 55th floor, and the building is surrounded by 2.6 acres of landscaped gardens at ground level.

The apartments at Harcourt Gardens have large glass walls with thin metal frames and minimal solid walls in the living spaces to make the most of the views. Harcourt Gardens is the second of three towers in the South Quay Plaza development.

Number of units: 351 apartments
Price range: One-bedroom flats start from £720,000 and three-bedroom flats from £1.68 million
Developer/Architect: Berkeley Homes/Foster + Partners
Residence sizes: One-, two- and three-bedroom apartments and penthouses
Amenities: On the tower’s 18th floor lies the “Bamboo Sanctuary,” comprising a state-of-the-art gym, health suite and spa, leading to hot tubs on the outdoor terrace, overlooking the London skyline. The 37th floor has the “iGarden” co-working space with indoor and outdoor options, as well as a games room and a soundproof karaoke studio. On the 55th lies the “Sky Meadow,” a roof garden with a barbecue area which will provide views of the London skyline at almost 200 meters high. Residents have access to amenities at the Quay Club at South Quay Plaza’s Valiant Tower, which include a swimming pool overlooking the South Dock, extensive gym facilities, a 56th-floor bar and terrace, a screening room, a private dining room and a meeting room.